From OKC Museum of Art: The Painters of Pompeii: Roman Frescoes from the National Archaeological Museum, Naples will see a number of collection highlights travel to North America for the first time. Opening June 26 and running through October 17, this historic presentation of the art of painting in ancient Rome will be presented exclusively at the Oklahoma City Museum of Art before returning to Europe.

I’ll admit I tend to romanticize anything from Ancient Rome – togas, laying around eating grapes and taking communal Roman Baths (thermae) and gladiators. “On tap: fight lion at 2p then bathe with my bros at four then drink a bottle of wine at cousin Atticus’.”

Or I think of the Roman myths and gods, which are basically Greek gods that Romans thought were cool and so re-named them and took the myths on as their own.

While that’s the extent of my knowledge about Rome, I think frescoes are cool as hell and I was thrilled to get to see so many in The Painters of Pompeii exhibit now showing at the OKC Museum of Art. And, even cooler, Patrono (upscale casual Italian restaurant at 305 N. Walker) is managing the Museum Cafe throughout the length of the exhibit and it was, as expected, delicioso. And that’s no myth. See my favorite frescoes below aaaand my said yummy food and rose’ from my visit- and then go see for yourself. Highly recommend for a “day date” since it closes at 5p except for Friday, when it’s open til 8p. Again, I love the details of the cupids. Zoom in for the details of the cupids Tickets are $16 for adults, $12 for seniors and college students, $10 for retired military and FREE for active military, MOA members, and children 17 and under. 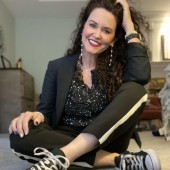 Malena is a brand strategist and storyteller and founder of Yay Dude! and Chicks in Charge. Her favorite things are all the section of this site - supporting local eateries, shops, artists, college football, hiking, wine and travel! As champions of small business and building commun

When it’s an Orange Nutella Cruffin kinda day! I

It’s the baby goat 🐐 squeak toy sound for me!

🎡YAY GIVEAWAY 🎡 The @okstatefair is Sept. 1

Our team had a great time @chicksinchargehq Fire &