Local folk-rock band The Imaginaries seem to be everywhere lately —from filming a star-studded movie down south in Chickasha to taking center stage up north in Edmond at the upcoming June 19 Heard on Hurd, presented by Citizens Bank. The Imaginaries band is made up of husband-and-wife duo Maggie McClure (piano, keyboard, vocals) and ShaneHenry (guitar, vocals). The pair share a talent for singing and songwriting, and both Oklahoma natives originally enjoyed success as solo artists. After traveling to Muscle Shoals, Alabama,to perform a couple of songs for Grammy-Award winning engineer John Cuniberti’s YouTube series called “The OneMic Series,” the couple returnedto the iconic music city to record their debut albumthat releasedin March 2021. The Imaginaries enlisted the help of session musicians, legendary Muscle Shoals “Swampers” and others to create the highly anticipated self-titled album, which they also produced and includes the hit “Revival.” Watching dynamic duo perform live, it is easy to see the chemistry between them and the passion they have for each other and their music. For a special summer treat this month, be sure to check out Heard on Hurd June 19, where The Imaginaries will play a full band show. The event is free and open to all ages. 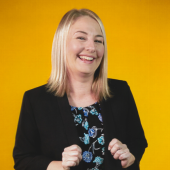 Jennifer is an OKC native who loves to write just about anything. If she’s not at the keyboard with her creative cap on, you’ll probably find her kayaking or paddleboarding at local lakes and rivers. Book of the Month | These Precious Days